Announcements of proprietary software may fit better in the Marketplace.

actually jackdmp aka jackd2 uses multiple threads/cores *iif* the jack graph takes 'parallel' paths; iow: jack clients that are connected consecutively do always use one and only logical thread/core (might migrate across the several available but that's purely os/kernel/cpu scheduler business, not jack's).

qtractor (and also ardour ofc. when set as a jack client): as one single jack client, all pure-DSP/real-time processing will only use one jack-thread/core (the real-time one), no matter what; however, due to their multi-threaded architecture, most non-real-time processing, which includes many several other tasks than just the GUI event-loop for that matter, will take and will be scheduled to run on any other core/thread and none of that related to the "multi-processing" feature of jackdmp/jackd2, whatever.

so whether being called a DAW, or not, is not the point here

jackdmp/jackd2 will only take use of more than one core if and only if you have split graph paths.

eg. assuming A, B, C and D are different jack client instances:

hope to have made it clear now.
cheers
Top

Thanks rncbc.
If this has something to do with it, how does irqbalance (viewtopic.php?p=108966#p108966) relate to audio processing? Is that (still) important?
FZ - Does humor belongs in Music?
GNU/LINUX@AUDIO ~ /Wiki $ Howto.Info && GNU/Linux Debian installing >> Linux Audio Workstation LAW

rncbc wrote:so whether being called a DAW, or not, is not the point here

jackdmp/jackd2 will only take use of more than one core if and only if you have split graph paths.

Exact, and that was my point here, Ardour does that, you'll find a rt-thread for any track you create in ardour, so, parallel processing is possible when use jackd2.

My stance about qtractor being a DAW or not, was just a joke, for me, it is.

On the road again.
Top

q.png
You do not have the required permissions to view the files attached to this post.
Linux – MOTU UltraLite AVB – Qtractor – https://soundcloud.com/suedwestlicht
Top

tramp wrote:Ardour does that, you'll find a rt-thread for any track you create in ardour, so, parallel processing is possible when use jackd2.

my point is that so called Ardour's rt-thread per track are NOT the same as the jackdmp/jackd2 process cycle real-time thread(s), precisely the ones that make up for its multi-processing/core magic

True, but nuitpicking. The result is the same.
On the road again.
Top

It is. The magic to Split the dsp over several cores is done in jackdmp, but the bare boone requirment therefor is, well, multiple callbacks.
On the road again.
Top

Paul Davis wrote:The parallelism relies on you having as many (or more) tracks as you do CPU cores. They also need to be independent (i.e. Track 1 does not feed Track 2). Under those circumstances (which are quite typical), you would get full utilization.

However, note that Ardour sessions with 100+ tracks run relatively easily on a 4 core system unless all the tracks are heavily burdened by CPU intensive DSP (like Reverbs and certain kinds of EQ), or digital synthesis.

Good news. The simpler it is for distributors and users to enable a RT kernel the more non-nerdy users will see the power of Linux for musicians and audio workers. Without iLok and phone-home malware (aka "installers" and "license managers").
Linux – MOTU UltraLite AVB – Qtractor – https://soundcloud.com/suedwestlicht
Top

Nvidia is opening up a bit: The company has recently released details on programming current generations of graphics chips under an open source license on Github.https://github.com/nvidia/open-gpu-doc This makes the work of open source developers easier, even if important information has yet to follow. https://www.phoronix.com/scan.php?page=news_item&px=NVIDIA-Open-GPU-Docs

So far, Nvidia has had a rather bad reputation with open source developers. No wonder, because unlike AMD and Intel, the company does not drive open source Linux drivers for its PC graphics chips itself. The company also helps only insignificantly and has so far handled driver programming details like state secrets. Linux developers therefore have to work a lot with reverse engineering, which is one of the main reasons why the "Nouveau" kernel and OpenGL drivers, which are standard in distributions, have many weaknesses; for example, they only loosen up part of the 3D performance and by no means support all the functions of GeForce chips.

Ultimately, however, more is needed before this problematic situation can improve significantly. For proper open source drivers, it would also be important to finally provide Linux distributors with better firmware: The one currently provided by Nvidia is more of a crutch, because it can't switch graphics chips into the most economical or fastest operating modes. This is currently the main reason why the power consumption of many modern GeForce GPUs with the Nouveau driver is often higher than with the proprietary driver, but the 3D performance is significantly worse at the same time.

Page 2: Other highlights of Linux 5.3

Support for AMD's new graphics chip architecture is one of the highlights of Linux 5.3. The kernel version expected on September 9 or 16 will also pave the way for real-time support in Linux. The main development branch of the kernel includes a change https://git.kernel.org/pub/scm/linux/kernel/git/torvalds/linux.git/commit/?id=a50a3f4b6a313dc76912bd4ad3b8b4f4b479c801 with https://git.kernel.org/pub/scm/linux/kernel/git/torvalds/linux.git/commit/?id=70e6e1b971e46f5c1c2d72217ba62401a2edc22b a new kernel configuration option that will eventually allow you to build a Fully Preemptible Kernel (Real-Time/RT). Such kernels can meet real-time requirements - guaranteeing that certain tasks can be completed within a pre-defined period of time, even under adverse conditions.
Adaptation with signal effect

The changes with the CONFIG_PREEMPT_RT configuration option give the impression that the real-time Linux patch collection PREEMPT_RT, developed almost fifteen years ago https://wiki.linuxfoundation.org/realtime/start, has finally moved into the official kernel. Many adaptations developed in this "RT-Tree" have already moved to Linux in recent years. Now follows the configuration option - many other things that are important for modern real-time operation, but remain in the RT-Tree for the time being.
c't/Thorsten Leemhuis

The configuration option does not show up at all for the time being. It signals to the world that Torvalds & Co. will soon be integrating the real-time patches remaining in the RT tree, even though Torvalds was initially rather sceptical about the idea. This is intended to motivate kernel developers who are not interested in real-time patches not to get in the way of reviewing and integrating any remaining real-time changes to the RT tree. There aren't that many of them anymore, but some concern the central and therefore critical infrastructure of the Linux kernel, where the developers take special care.

Maybe patches for 5.3 will follow, which still show the configuration option. However, it remains uncertain how long the integration of the remaining adaptations in the RT tree will take (Real Time is Coming to Linux; What Does that Mean to You? - Steven Rostedt, VMware https://www.youtube.com/watch?v=BxJm-Ujipcg); its developers last autumn had set themselves the goal of transferring everything essential to the official Linux kernel in 2019. However, the time remaining for this is slowly running out. 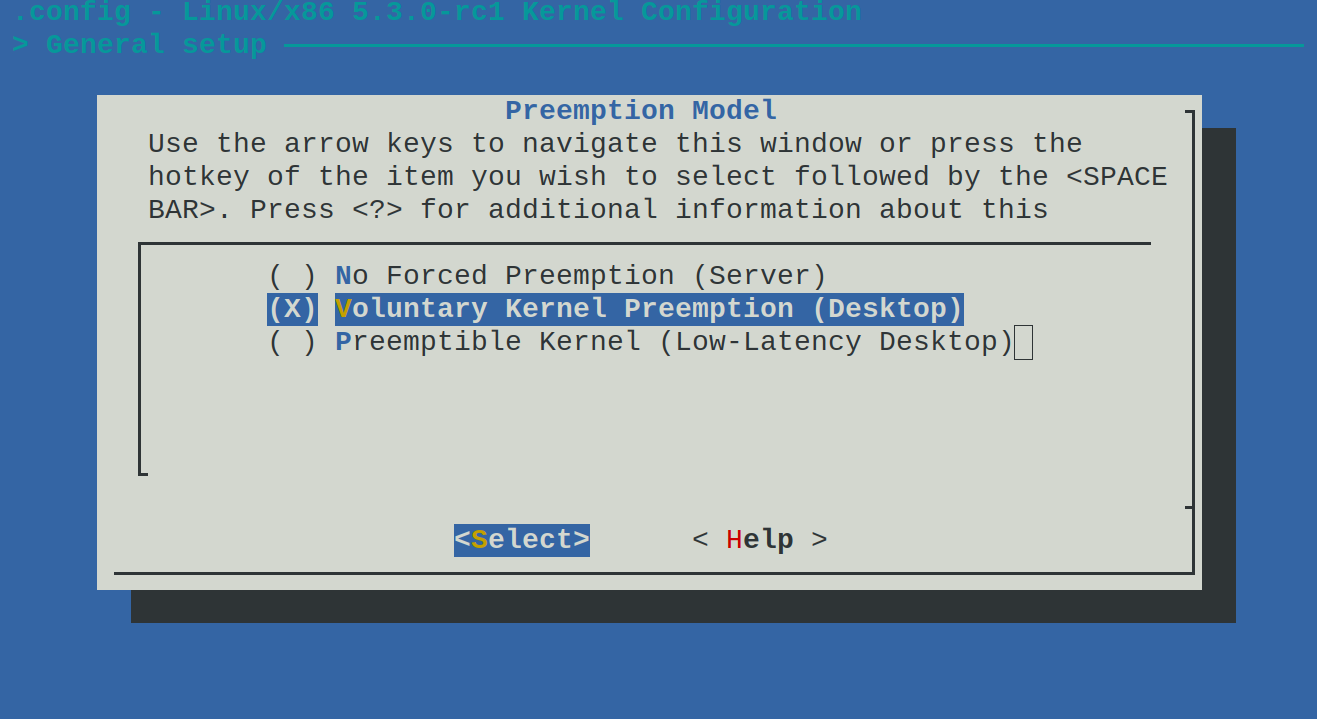 The new option for building a real-time kernel has not yet been shown, because it should have one thing above all else: Signal effect. (Picture: c't/Thorsten Leemhuis)

Users browsing this forum: No registered users and 4 guests